A Plethora of NHS and private healthcare workers see willpower as the most important component in addiction, but most believe there are also factors outside individual control. Find out more below!…

How far can people control their addictions? Treating drug and alcohol misuse costs the NHS as much as £4bn a year, so finding the answer could have a huge financial benefit for the NHS and the UK, not to mention all of the addicts who would benefit from everyone “singing off the same hymn sheet” and working on a united front to raise awareness, improve recovery therapies and treatment options as well as setting the record straight so that the general public know the true facts, statistics and availability of treatment options. It would also benefit addicts who are currently going through the recovery process, but would also welcome new addicts into treatment and recovery too without being concerned about any misinformation, myths or stigmas that may put them off seeking treatment or from family members or friends who may be misinformed.

But, What Do Healthcare Professionals Think?

A new YouGov study conducted among 1,027 NHS and private health workers and healthcare professionals undertook the YouGov survey, including Doctors, Nurses, Paramedics, Dentists, scientists, researchers, managers, Social workers and social care staff, admin and HR staff, public health, care homes, mental health services, patient and non patient facing roles and whether they worked in the NHS and private sector, reveals to what extent they feel drug, alcohol and cigarette addiction and obesity are within the power of individuals to control their susceptibility or management of developing and overcoming an addiction.

The study also looked at the participants location/region around the UK, whether they were male or female, their age and how long they were in their current job/role

They were asked the following question: “When it comes down to issues like addiction and obesity, do you believe the reasons why people find themselves in these situations tends to be down to personal choice (e.g. the behaviour could be different if the person was willing to change) or due to factors beyond an individual’s control (e.g. the behaviour is dictated more by genetics, upbringing etc?”

Almost a third (31%), believe that cigarette addiction is entirely down to personal choice, with 16-20% saying the same of obesity and drug and alcohol addiction. By contrast, a mere 1-2% said these issues are completely outside of an individual’s control.

The table below shows the total of all the responses combined to give you a general overview of the results. 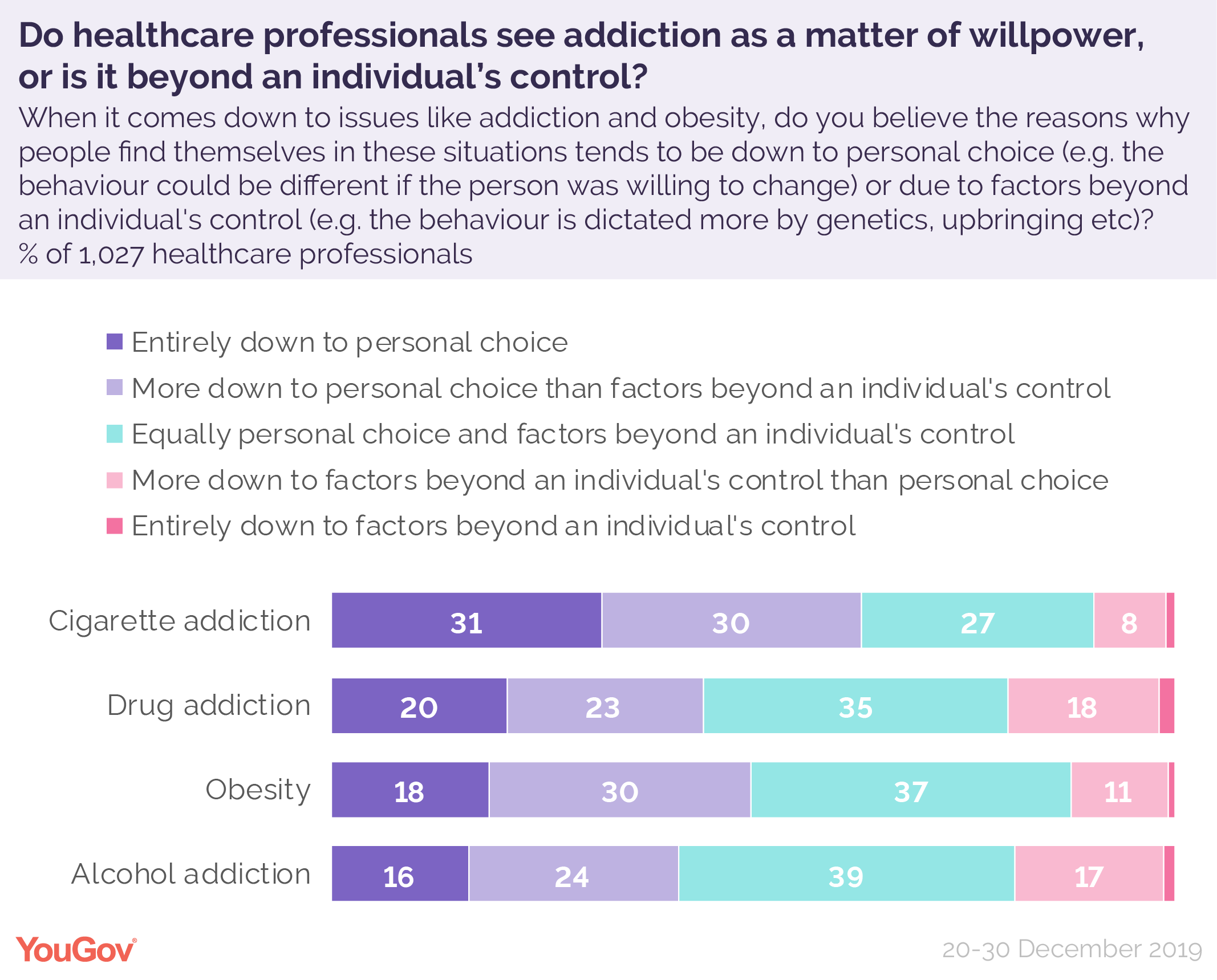 Broadening the categories finds that 40-61% say that personal choice is a greater factor in these issues than things an individual can’t help, like genetics. Only 12-19% take the opposite view, saying that such factors have a greater influence than personal choice.

Between 27% and 37% felt that both factors played an equally large role in addiction and obesity.

However, looking at the data from a different perspective shows that the overwhelming majority of healthcare professionals (66-82%) believe that factors beyond a person’s control play at least some role in addiction. In the case of obesity and drug and alcohol addiction 49-57% of professionals believe that the factors that are beyond the ability of a person to control are as big, if not bigger, than the willpower factor.

The NHS itself seems to be non-committal on how far it thinks addiction is within the ability of an individual’s control, saying simply that “Some studies suggest addiction is genetic, but environmental factors, such as being around other people with addictions, are also thought to increase the risk.”

Main Statistics From The Survey

What Do These Statistics Show Us?

This survey only included 1,027 of health workers from all areas, genders, ages, areas of expertise and location so the data is rather limited. We think this survey should be done again, including a larger number of candidates surveyed to see whether the results still matched the limited number of candidates used in this one.

However, working from this data, it would seem that teams from different disciplines are not receiving the same level of education about addiction compared to others. Certain disciplines such as GP’s and private sector staff still see addictions as a choice rather than out of the individuals control.

Likewise, the “north/south” divide also seems to still be evident when it comes to staff members opinions of addiction. Those in the north of England see addiction as a choice whereas those in the south of England tend not to.

If these 4 initial points could be implemented, not only would more addicts seek and successfully undergo treatment, but it would also save hundreds or thousands of lives each year, save vital funds for the NHS, Social Care Services, GP’s, demand on the 999 system and reduce the amount of people currently seeking mental health help for an un-diagnosed substance addiction, increase workforce productivity and emotional well-being and would also benefit those addicts who are currently having to struggle due to the misinformation, stigma, shame, embarrassment, judgement and other negative connotations of addiction.

Training opportunities are available within the NHS, however this is not compulsory for private sector staff or those in social care services. In 2018, NHS Ayrshire & Arran began offering training courses for staff. However unfortunately, this is not a standard response across the country.

You can find the full results from this survey as a PDF file on our Downloads & Media Page here.

You can also find your nearest drug and alcohol service using the link on our Help & Support Page here.

We welcome the opportunity to converse with public health officials, Government, NHS and private sector providers to offer our support, guidance and advice on this issue. Please email us: awareness@drink-n-drugs.com

Providing useful, relevant, up to date information and support for those suffering from active addiction or those who are in recovery. View more posts